Have you ever looked at a ministry or nonprofit and asked yourself, is what they’re doing really making a difference? Maybe you have looked at Mission U-Too and said “there goes those crazy people giving away free burgers, what is the point of doing that week after week?” 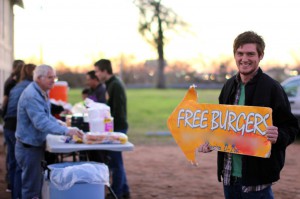 I can personally tell you the point is simple: this is what God has told us to do. The humbling part of ministry is when God allows us to see the work that He’s doing when we are obedient to what He’s told us to do.

As we build relationships within the communities we serve in each and every week, we get to know the people that we serve. This is not always the most comfortable or easy thing to do. Sometimes you place judgment on the people that are coming for food wondering if this person really needs it? When are things going to change with them?

You may remember me sharing about a couple of homeless guys that we have been getting to know for the past two years here in Bastrop. These two men are both heavy alcoholics and are more comfortable living in the woods, where they do not have any responsibility and can also drink as much as they want. God has continued to use these two men to teach me, a few of our volunteers, and supporters like you, to love unconditionally and how to meet people where they are at, instead of where they’re not. 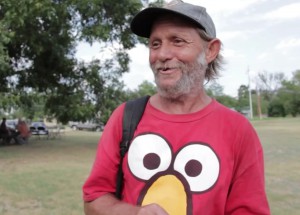 Jeff is one of the men that has been living in the woods for the past 10 years. He comes every Monday night for a burger and he stays for a bible lesson and asks questions. He is one to listen to what God might have for him, even though the alcohol continues to have the best of him. For the past couple of years there has been many times where I have gone into the woods to their camp, where Jeff and Don live. I have also found them hanging out under one of the bridges in town. The location of the men doesn’t stop me from sitting down with them and their buddies and opening the Bible and we begin studying together.

I constantly wonder when is something going to change for these men. At what point is something going to break and relieve them from the bondage of alcohol? I don’t know nor is it my job to know, but it’s our job as believers in Christ to love our neighbor as yourself and to show the unconditional love of Christ. Jeff has been close multiple times of going to rehab and wanting to kick his habit. But every time I get the green light to take him, he allows his addiction to take over and to hold him back. Every time the opportunity arises, it allows Jeff to get a little closer to recovery.

This past February, on a Saturday morning, Jeff had too much to drink. As he was hiking over the bridge on 71 (he normally crosses to head into town), he stumbled into oncoming traffic. After nearly getting hit, he backed up to the side rail, lost his balance and fell 25 feet to the street below. A witness reported the fall and a short time after a police officer arrived at the scene and took one look at him and said “this guy is not going to make it” and flight for life of Austin was immediately called. Jeff was unconscious and put on life-support. The first CT Scan showed multiple skull fractures and internal bleeding in his brain. It was not looking good for him.

In the meantime his friend Don called me Sunday evening saying he heard that Jeff fell off the bridge and wanted to know more information. As I explained to him about Jeff and that we needed to pray for him, he asked me if I could meet him at McDonald’s in a couple hours. I agreed to meet him at 10 o’clock Sunday evening. As I arrived I noticed other homeless men sitting around. I walked over to Don and gave him a hug and began to give him an update on Jeff. During the conversation the other homeless men came and sat by us wondering what was going on.

As I sat there, I had a very frank and stern conversation with Don asking him how much more it was going to take for him to quit drinking and at what point will he choose a different way of life. He openly talked to me about his addiction and life details. Because of the relationship Don and I had, he felt a close friendship, trust, and genuine love that I had for him. If I were someone else, our conversation would have sounded a lot different.

During our conversation at McDonald’s one of the homeless men piped and up and started asking questions about Jesus. Mind you, I have never seen this young man around the area before. So I asked him where he was from and he told me he currently moved here from California. I tried to engage in conversation with him but he held me at a distance. He kept coming back for more conversations and I could tell he could see something different in me and that this guy (me) cares. It wasn’t me that he saw, it was Jesus that he was seeing and I was being the tool to share Christ’s love. Jesus was beginning to target his heart.

It was cold and rainy this very night and I wasn’t able to leave them on the streets. I put three of them in one hotel room. I drove them to the hotel room and checked them in and Don asked me to come up to the room to pray with them. I can never pass up the opportunity to pray with someone. After I finished praying I walked outside to leave, the young man from California had followed. I told him this Jesus I was talking about earlier at McDonald’s is real. That Christ desires a relationship with you. The young man gave me a blank stare and he didn’t know how to respond. I asked him if he would read the Bible if I give him one. He said “yeah.” He could not believe that I would give him a free Bible to keep. He had asked where he should start reading and my response what The Book of John. I prayed with him and then left the hotel. 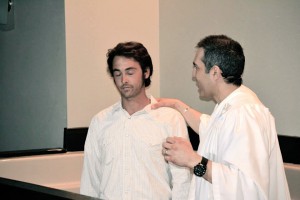 Over the next week I ran into him multiple times. Each time I would engage in conversation encouraging him to find a job and to keep searching. He would tell me a little bit more about his life and that he was here because of his girlfriend and baby moved to Bastrop to be close to her family. He proceeded to tell me that his girlfriend wants him to go to church with her. I encouraged him to go with her and little did I know it was the same church that my family and I attend. I walked in the following Sunday and when he saw me a great joy had overcame him. I encouraged him to listen to what God had for him. After the service I asked him what he thought. He looked up at me and said, “we didn’t meet by accident did we?” He asked me if  there was more to this and I confirmed to him there was. You see, God was beginning to work on his heart and was revealing Himself to this young man. I was just a vessel to give him a glimpse of hope. About a month later, he made a decision to give his life to the Lord and was baptized that following Sunday.

We went to go see Jeff a few days after his accident and he was a little out of it, but awake. The doctor said she didn’t understand how he could be coherent because when she looked at his second CT Scan his condition was worse. She was not expecting much of a recovery. Jeff proved them all wrong! He woke up conscious and aware of his surroundings; he knew what year it was, and he knew who he was! It’s a miracle that Jeff is out of the hospital and doing well. The only explanation we have for Jeff’s healing is the power of prayer. God protected my friend.

The officer that found Jeff was truly amazed. He was amazed by the fact that Jeff was going to make a full recovery and also the fact of how much we genuinely cared for Jeff. You see, the officer has been chasing these men the last several years. The homeless men would get tickets for trespassing, public intoxication, and multiple complaints of inappropriate activities. Despite their destructive lifestyle of living on the streets, this officer could see a genuine love I have for these men, which led him to wanting to know more about our God.

Mission U-Too is nothing more than a tool to live our faith out loud, with the world, so people can see the unconditional love Christ has for us and them, in a way that is visible to our communities, and people that live in them; working to do life together. When we go out of our way and be obedient to God just like He has told us to do, He will move the lives and hearts of the people around us, and there is no telling how far the ripple effect goes. 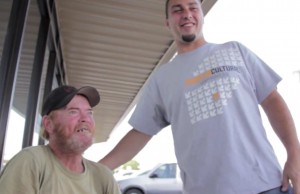 Two weeks later Jeff is out of the hospital and looking for work! And many other people have seen the love of Jesus playing out in their lives. Truly Amazing.