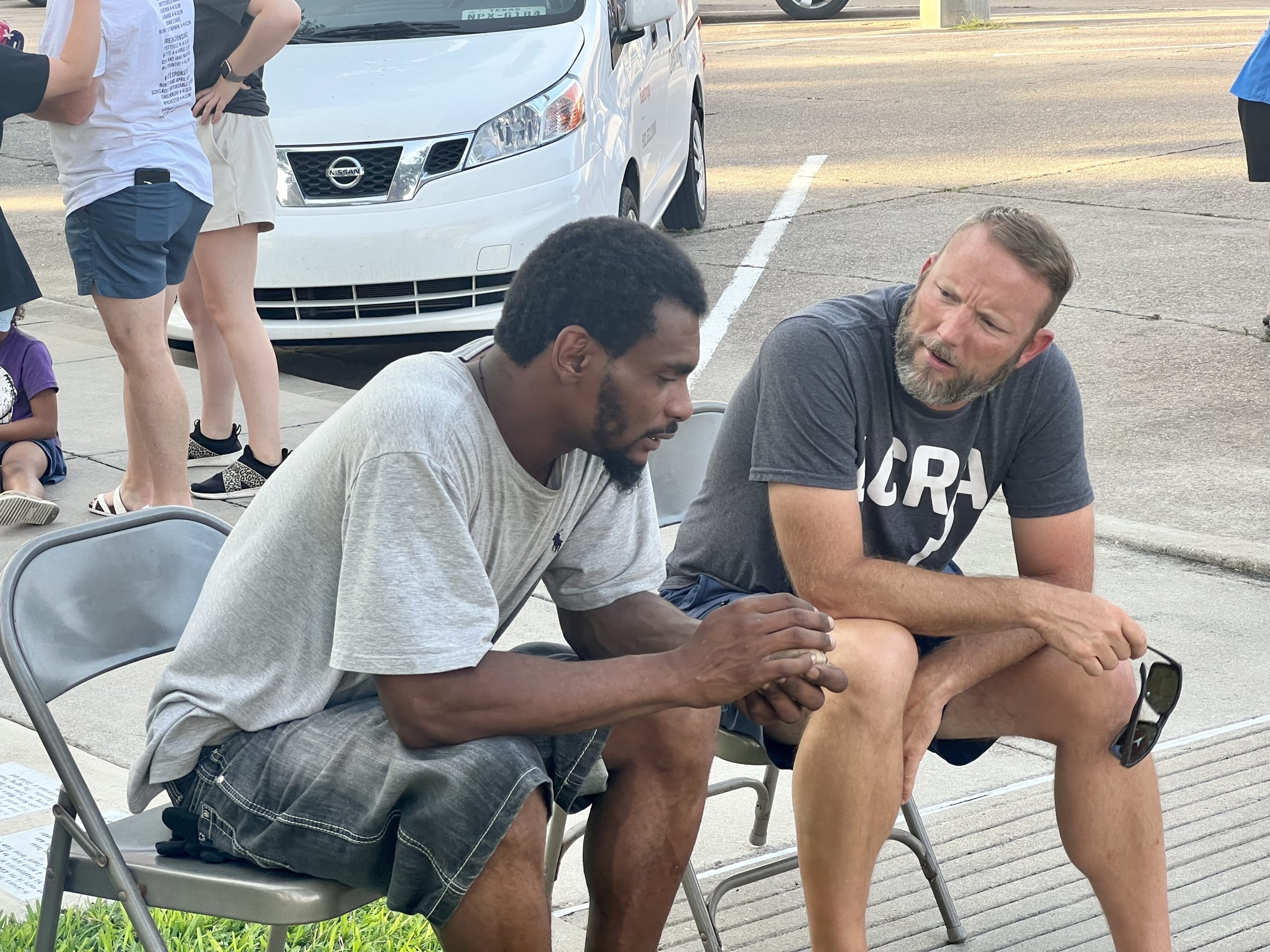 Therefore go and make disciples of all nations, baptizing them in the name of the Father and of the Son and of the Holy Spirit, 20 and teaching them to obey everything I have commanded you. And surely I am with you always, to the very end of the age.”

At Feed the Need Missions, our mission is to mobilize believers to feed people physically and spiritually in their communities, while actively building disciple-making relationships. This priority of discipleship comes from the directive of Jesus in Matthew 28:19-20, and we take it very seriously. So how are disciples—and disciple-makers— built up? Read on and discover a few tips we’ve learned as we’ve served over twelve years and in numerous communities.

Nathaniel has been coming to the Bastrop-area Feed the Need Missions sites for years. One Monday night, while Nathanial was getting his food, he struck up a conversation with Feed the Need Missions President Jonah Beyer. While the two have been familiar with each other, this unplanned, unrushed conversation allowed the two to connect on a deeper level. “Just asking basic questions, I could tell that he was hungry to learn and ready for more than just food. He was super hungry for relationship,” shares Jonah.

The conversation deepened into Nathaniel’s spiritual life. Jonah felt they needed more time to really delve into this. So, because he needed to make a stop at the La Grange site, he asked if Nathaniel would like to tag along. “That 30 minute drive gave me the opportunity to intentionally ask him questions about his past, where he came from, to gain a better understanding of his current spiritual condition,” he said.

If we want to become effective disciple-makers, we have to show up. Not just physically. But with spiritual eyes wide open. Wherever we are, and whatever tasks are at hand, one essential posture is building margin into our activity to do more than task. We have to slow down. See people. Be available to talk. Take our time. Be ready to invest time and ask questions. Listen more than we talk.

We must look at every encounter not as an interruption, but rather as a divine appointment.

The time with Nathaniel had two benefits. For one,  Jonah now had a sense of Nathaniel as a person. Second, because he had invested time and attention, he had gained perspective and relational credibility that allowed him the privilege of speaking to his life. Now he could prayerfully tailor encouragement based not on assumptions, but time spent learning this person.

The live-altering truth of Jesus Christ is unchanging. But how we present and apply that truth in discipleship isn’t a one-size-fits-all model. People have different struggles. Different temperaments. Different levels of education and learning styles. We have to know who we are talking to in order to know how to guide them to Jesus, and to holiness.

“As the conversation progressed, Nathaniel began sharing his passions with me. We had this amazing conversation about his life and his church back ground, his passion for wanting to do better and serve God, his desire to preach,” Jonah said. “He has this desire to be an influence for Christ in the gang world, because he was brought up around gang activity. He sees a pretty harsh street world that needs to be reconciled, to learn how to love.” But his hope for future ministry is only part of the story. He has significant needs himself right now, from struggling at work, to trying to be there for his two children who live apart from him, all while living in a make-shift shelter wrapped in a tarp, which is the only shelter he can currently afford.

True discipleship comes when we get a sense of a whole person. To disciple others, we should know what their hopes and passions are. But we should also have a sense of their greatest concerns and needs. Outside of sharing the hope of Jesus and praying they will accept Him, we can’t create goals or plans for people. And we have to be sure our suggestions are aligned with an understanding of the obstacles they face. Our job is to point to Christ, help them see and understand dangers they may not be aware of, remind them of promises they can stand on, and encourage them along the way.

Tip #3: Discipleship is a Team Sport

Once at the La Grange site, the two men were greeted by Dave, another volunteer. As Jonah greeted the site team and tended to things, Dave stepped in to talk to Nathaniel. “They ended up talking for like two hours,” Jonah shares. “Dave, after their conversation, really felt compelled to get housing for Nathaniel, to help him be there for his kids, help him financially, to meet some of the pressing needs he’s facing.” But again, more than physical needs, Dave felt a burden to help Nathaniel understand Jesus. “Often we see people at the sites who do not having a good understanding of the Gospel. They don’t have a real understanding of who God is. There is a disconnect about what it really means to surrender your life to the Lordship of Christ.”

As the men talked, Jace, another Feed the Need Missions staff member, approached the group and began talking to Nathaniel. “Nathaniel walked away from the evening wrecked. He told me ‘I needed this so bad. I haven’t had anybody to encourage me or speak life in to me, or help me to pursue God.’ Now here were three men making themselves available to invest in him, to see him, to listen to him, and to encourage him.”

That healthy dynamic, that consistent truth, was a significant in Nathaniel’s life; but it was an important moment for Dave, too. Before he left, Jonah was able to spend time with Dave, coaching him. To build disciple-makers, it is important to have follow up conversations, answer questions, and to encourage those who answer the call to minister to their community. Jonah then drove Nathaniel home, where he was invited into his home to pray for him in Nathaniel’s own space.

One of the most incredible things about disciple-making is that it isn’t all dependent upon one person. God has created a network of believers. Some plant seeds, others reinforce truths, still others model, and at just the right moment, the cumulative experience hits home and brings breakthrough. What is most important is not that we “close the deal,” but that we engage in the process in obedience to the Divine command we’ve been given. 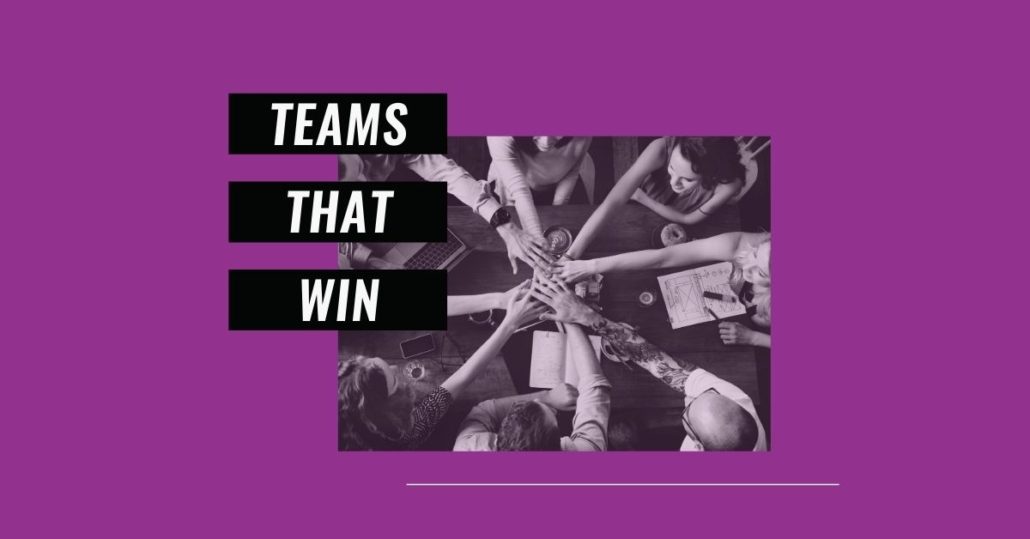 This is especially true of any Christ-centered endeavor, whether it’s a ministry team or a faith-based non-profit like Feed the Need Missions. There are times when some of us more ambitious and energetic types might believe it would be much easier to go it alone. But biblically, to be truly effective, we must embrace the pursuit of the “dream team.”

Paul the Apostle went to great lengths to educate the ancient Corinthian Church that while we are uniquely gifted, we are wholly interdependent—designed to work in tandem to achieve greatness. Maybe you’ve had the joy of working in a group in which all are individuals operating cooperatively in their zones of excellence, not for personal glory, but for God’s glory. But for most of us, that feels like an illusive myth.

The truth is, building an effective team, and operating as one, is not easy. Great teams don’t happen by chance or by luck. They are built on self awareness, intentionality, right placement and shared vision. If you’re ready to take your group of highly skilled individuals to the next level, know that the road might not be easy, but it will be worth it. If you’re looking for practical ways to develop your mission or ministry team, read on to discover a few tools we’ve discovered that can help you get there.

Spiritual gifts are unique abilities imparted to Christ-followers by the Holy Spirit. These are action-based, and are, simply put, the task God has in mind for an individual—their spiritual work assignment. Several scripture passages including 1 Corinthians 12, Romans 12, Ephesians 4, and 1 Peter 4 outline the many ways an individual may be equipped supernaturally for a particular ministry function in the body of believers.

One of the reasons spiritual gifts should be of paramount consideration on a ministry team is that it allows God the priority consideration. Placing a person on your team in a position to operate within their call and gifting will foster joy and fulfillment for that individual and great blessing to the team dynamic as they receive the fruit of it.

One thing to keep in mind is that, just as seasons change, so do spiritual gifts. These God-given abilities are given at the discretion of the Holy Spirit. They are not a person’s identity and it’s possible that over time they will change. It is important to evaluate these occasionally; in fact, they can be a helpful indicator of a need for role changes on a team.

There’s a reason why so many corporations invest time and money to discover a potential employee’s temperament. Whether it’s enneagram numbers, animal types, the DISC or some other temperament questionnaire, ensuring a personality fits a particular team culture or a job assignment is extremely beneficial for a team’s success.

In general, these assessments give you an idea of how a person achieves the goals set before them. Some people are natural delegators or risk takers. Some crave routine, harmony and consistency. Others want to be given a detailed job and left alone, and still others love to work through problems socially.

Temperament assessments for a team bring self awareness, but they also help build sensitivity and reduce frustrations. As you share around the table, your team will discover new, viable options for solving problems. Seeing a lack of certain temperaments on your team can help you to recruit the best candidates as you expand. And hopefully, everyone will begin to appreciate the strengths others bring to the table. In short, each member will begin to understand their unique contribution while valuing those of others.

Once you understand who’s on the team, and what they bring to the table, it’s important to align them to a singular vision. You can have the most skilled team in the world, but if they don’t have a clear understanding of where they’re going and how to get there, it’s going to be a real struggle to achieve success.

Does your organization have a strong mission statement? Creating a mission statement isn’t just about snappy marketing. It’s the driving force behind everything you do. Steven Covey’s 7 Habits of Highly Effective People offers an exceptional in-depth guide to how to create a group mission statement. Once you develop yours, every action and decision must be filtered through the question: Does it help us achieve our mission?

Other considerations for focusing the culture and activity of your team are creating clear values and definitions of success. These help the team understand not just the goal, but the preferred way of getting to it. The best teams celebrate staff and volunteers who embrace these and make it a point to revisit them regularly.

Whatever your temperament or spiritual gifting, there is a team waiting to embrace you at Feed the Need Missions. An established 501(c)3 organization operating in nine rural communities across Texas, we’re always looking for potential site coordinators, volunteers, church partners, and corporate partners in cities across the U.S. to join our mission to feed people physically and spiritually. If you’re ready to step in to an organization that is well-equipped to activate you, we’d love to hear from you.