A week ago Sunday, we watched the news as tornadoes began to rip through the Midwest. Immediately we had volunteers calling and texting asking when are we leaving? So Jason and I begin to discuss whether or not this was a storm Mission U-Too should respond to. As we were discussing, we were determining how far we go with the resources we have.

The past three years we’ve been responding to disasters to provide hot meals, a listening ear, and hope in our Lord Jesus Christ. We have been able to learn more and more every time we go. Each disaster is different and unique. That’s the reason why Jason and I sat down and analyzed all the details that we knew about our previous experiences and capabilities. We struggled with whether or not to go, because it was further than we have felt we could be most effective. However deep down inside we felt God telling us to go. We have to obey and listen to Jesus commandment. 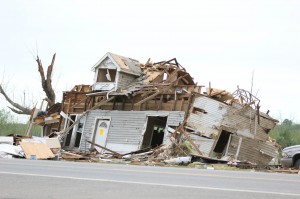 So we went! We started to assemble everything we would need and organized a team. By Monday afternoon we were on the road to a little town north of Little Rock, Arkansas. We drove through the night and Tuesday morning we arrived to a town right off the freeway called Mayflower. It’s where we saw the first signs of the tornado that ripped through and continued north.

We stopped at a convenient store to take a quick break. We randomly engaged in a conversation with the clerk, and she told us about all the areas that were hit and then continued to tell us about one area in particular that needed help back in the woods. It was a small little community in the middle of nowhere, so we headed down the path to search for the community. We did not find it, so we headed north to a town that we had intended to go to originally.

We pulled into a community that had so much devastation and already had a lot of people helping out. Our team attempted to set up in multiple sites and for whatever reason it just didn’t feel right. As we stopped at one site after another we kept getting pushed away. So we got back on the road and found ourselves stumbling across a little baptist church in the middle of the woods. The church received our help with open arms. Our team began to set up and cook and we saw God moving with lots of opportunities to help that local church body as they reached out to the victims and supplied a hot meal and provided a place of hope.

That night we ran into town to get a few supplies and on our way back we realized that the road the lady at the convenient store pointed us down was the community she had mentioned that needed help. It was exactly the spot where we needed to be.

You see, we had our own motives within our flesh. We desired to go into an area that was hit hard and had a lot of devastation and a lot of attention. But our God wanted us where He wanted us; and we didn’t listen right away. However the coolest part is, regardless of whether we listen or not, He still guided us right to where He wanted us to be. 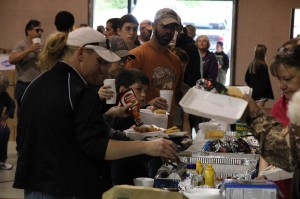 That first day after serving and driving through the night, the team was tired and our bodies where ready to crash but our Spirt was leaping with joy of all that was happening on the trip. We sat down and opened our bibles and searched after our God for what He wanted to teach us. As we shared our testimonies and God’s work with one another, I began to see God move; not just in the people we got to reach out to, but in our team also.

As God continued to move in our hearts, the church member’s hearts, and in the victim’s hearts, we were all filled with joy as we served and loved on those in need. This was even a local community that needed a bilingual speaker to help us communicate with them. Their homes were completely destroyed and members of the church had been trying to connect with the community for several years. God used one of our team members who is bilingual to help make connections as we delivered food and invited them to come over and get some much needed resources from the church.

I watched the members of the church welcome the victims with open arms. I saw God moving in the lives of the people. We built some incredible friendships and I look forward to crossing paths again. 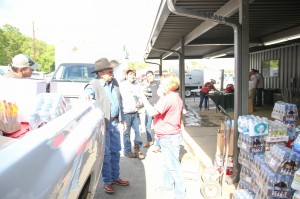 As we were coming to an end with this community Thursday afternoon, the question arose about another disaster in Florida. We were exhausted and tired and were ready to be home. Our team battled with their own flesh, and God said again, Go! He also provided a way for one of our team members, Jason, to fly back to Texas. The remaining four of us continued on this journey that God had for us. So we headed to Pensacola, Florida where flooding occurred all over the city.

Our team pulled in Friday morning looking for a place to set up. We really didn’t see anything right away so we showed up at a church to talk to them about the need in the local community. The community they mentioned was a community where the church members lived, and the flooding prevented the church’s disaster relief team from responding right away to the needs of others in the community. As we went out into the community we saw people working and food being served. We asked God to show us where He wanted us because the needs were already being met there. 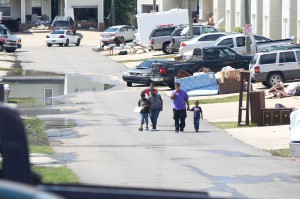 As we drove around town we spotted a small apartment complex of about 80 units half of which were underwater. It had been three days since the flood and we were the first to arrive on the scene for the people from the apartment complex. We began to set up and cook burgers while others were visiting with some of the people. They accepted our team and we saw the disaster and they continued to endure and receive. They shared their hearts and problems the community was facing. Some were saying the community is very poor, I don’t have much, I don’t have insurance, there’s no where to receive help. It burdened my heart.

Our team began to pray together and feed them. As we began to serve, one of the first families that walked up was a lady named Joy. She asked if I could pray with the family. Immediately Joy broke down and was weeping. They were trying to pick up the pieces that they lost. The next people who confronted me was a gentleman with his daughters and grandkids and I asked how they were doing. He told me that he lost his wife two years ago to the day! He is trying to stay strong for his girls and asked if I could pray for him. He immediately broke down in tears. 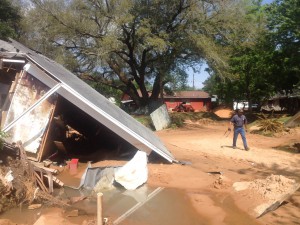 As we continued to love and serve in this community God also brought to our attention several other communities that needed support as well and sent several of our guys to deliver some boxes of meals.

We continued to serve in these communities and God began to remind us and convict us that none of this was about us; that it was all about Him. We began to ask ourselves how will these needs be met when were gone. God showed us that we had to point these people to Him, we had to get out-of-the-way so as they asked us where were from and who we are with, we would simply tell them Jesus Christ. The people began to feel God’s presence and we were able to pray for them. Then they knew they could trust God and us. The next day Salvation Army and Red Cross finally arrived as we began to pack up our trailer. Salvation Army assured me they would help give out vouchers for clothing and help with other resources these families needed. As we pulled out of the community I was reminded of a verse in Proverbs that says to be the voice for those who can’t be a voice for themselves. (Proverbs 31:8-9 Speak up for those who cannot speak for themselves, for the rights of all who are destitute. Speak up and judge fairly; defend the rights of the poor and needy.)

Out of the Spotlight 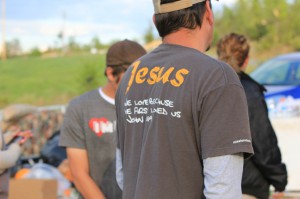 These locations Christ placed us at were tucked away and out of the spotlight. As we searched for where we needed to be we thought we needed to be somewhere we can make a large impact in the way of numbers. Especially because of traveling so far, and the capability we had to feed. That is not what God had in store for our team. He wanted to break down our pride and selfish desires. He still trusted us enough and guided us to the perfect spots where we could make the biggest impact. The only reason why the entire trip happened the way it did, was because myself and the team allowed God to have full control and to guide us on this journey to the places we needed to be. God continued to teach us to walk in humility. The trip was not about us, it was about His glory and His love shown to His people.

Please continue to pray for Mission U-Too and how God might be leading you to get involved in your community. So that His name would be made know!

An Update from Arkansas Got God?
Scroll to top