Enduring the loss of loved ones, surviving two floods, and rebuilding their life after three wildfires, has certainly taken its toll on Mike and Jane Haley. While the fires were angry and consuming every thought, every second, every ounce of positivity from the Haleys, God brought Feed The Need Missions exactly where He needed them to be.

On October 13th, 2015 the “Hidden Pines Fire” began its raging descent across Bastrop. The Haleys quickly were rendered helpless with the loss of water and electricity. Daily, Jane would leave their home to visit the Smithville Fire Department and fill plastic containers. On one of those exhausting trips a thin, blue-eyed young man name Bryan offered to assist Jane in filling the water jugs and carried them to her car. He shared with Mary that his mother had been in the fire zone and he spoke of God’s goodness and His protection. Jane was finding it difficult to think of a protective and good God; especially when a fireman confirmed, “It’s headed your way.” Bryan comforted Jane with a sweet smile and a promise of prayer.

It was a surreal environment at home as Jane and Mike gathered what they regarded as most important while grimly watching their cattle herded into trailers and taken away. From their porch, they watched the smoke as it approached, Blackhawk and Chinook helicopters dropping water on the growing fire, and a DC3 jet dropping orange retardant. Despite all these efforts, the fire continued to rage closer.

Later that night Bryan and Barb delivered a warm dinner, encouragement, and friendship to the Haley’s home. Overwhelmed once again with the ‘impossible generosity of strangers’, Jane and Mike hardly had words to express their gratitude for a hot dinner prepared by servant hands. 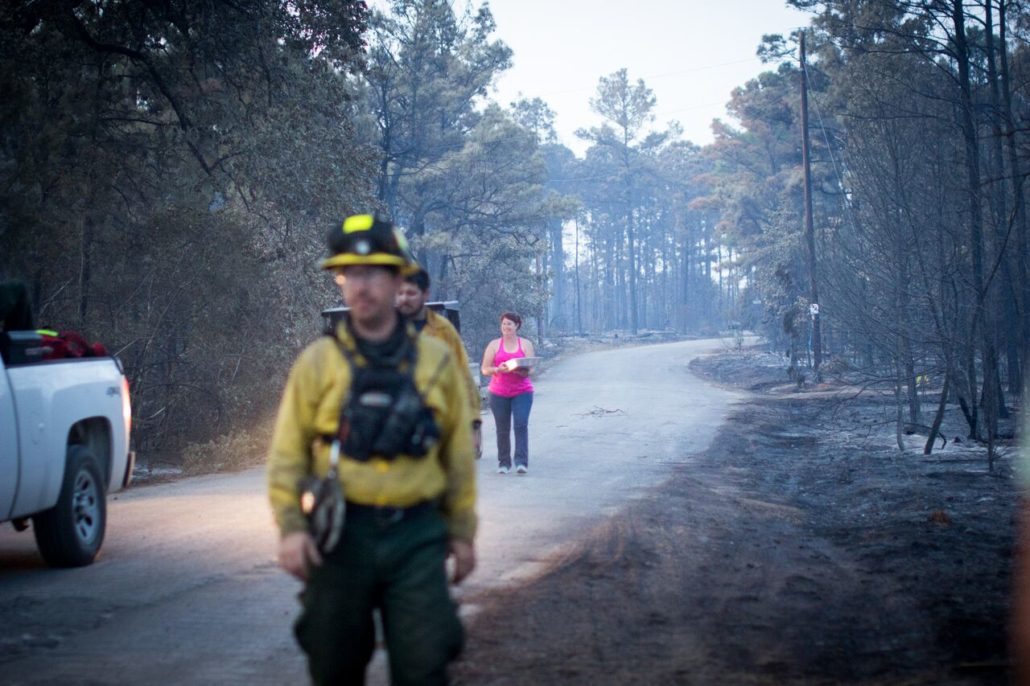 The Haleys returned the next day for breakfast and again stayed to prepare for lunch. As they were standing in the line serving, Mike received THE call on his cell stating, “If you have anything of value in your home, get it and get out now.” The fire was coming, and they had to get home immediately to get their bags, dogs and cats and leave. Despite the busy lunch rush the Feed The Need Missions Team surrounded Jane and Mike embracing them as they trembled and wept lifting them up in prayer.

Jane said, “What is of utmost importance to understand in our story is during deeply traumatic times, it was the over-riding blessings, being touched by something so great and outside of ourselves, the continuous encompassing demonstration of unconditional love by those in Feed The Need Missions that fed, encouraged and elevated our spirits. “Truly, the Feed the Need volunteers were the ‘outstretched hands and feet of Christ.’ They loved without question, served without hesitation and prayed in the face of obvious improbability.”

Help us be prepared for the unthinkable today.

Did you know September is National Preparedness Month? Since 2011 Feed the Need Missions has served communities hit with devastating floods, tornadoes, fires, and hurricanes with a hot meal, listening ear, and encouragement.

Can you help us be prepared to respond to the next disaster and make a donation today? Your gift of $10, $25, or $50 will help us respond quicker and serve more people when disaster strikes.

While we never hope for a disaster, we know your support will help us be even more prepared to respond when disaster does come our way.

The Beyond Gala Recap

Pray & Reflect: A Heartfelt Thank You Note
Scroll to top