Al was born in a little town of south Texas where he was raised as a migrant worker. He moved to Bastrop, Texas at the age of 13 and graduated from Bastrop High School. He joined the Air Force right out of high school and served our country. When he completed his time he moved back to the area and married his wife, Debbie. Al retired from the Travis County police force after 22 years, and 2 1/2 years with the State of Texas.

Al heard about Mission U-Too from a friend  who asked him to come and serve with him. It’s now been 2 years since Al has been serving. He went to the Bastrop North site and helped out with serving on the line and saw a really important need to reach out to folks. He said, “I had no idea what ‘Mission Youtube’ was or did. I fell in love with the needs to serve the community I was raised in.” For a while until Al became familiar with Mission U-Too’s name, he would call the ministry ‘Mission Youtube,’ as some still do. 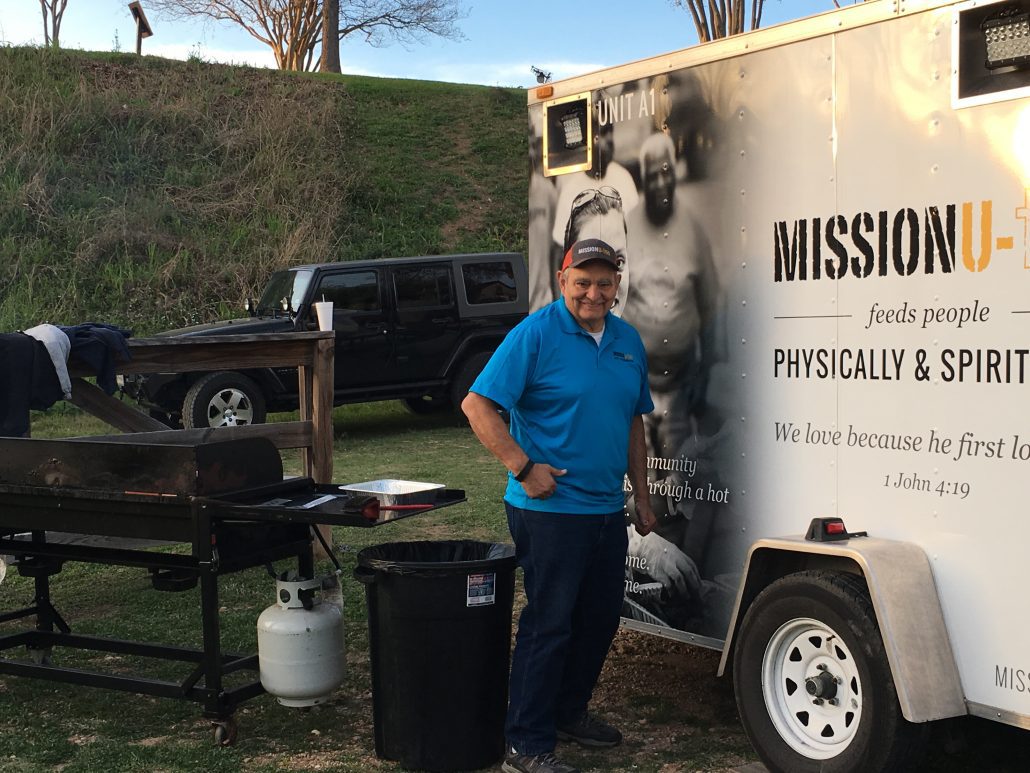 Al is currently serving at two sites. He’s a Site Coordinator at our Stony Point location and is currently filling in at our Bastrop North site. Al served our country well, and is now serving his community well.

Al was a bit optimistic about serving at the Stony Point site, but, unfortunately, it wasn’t as easy since he knew many of those who he serves in the capacity of a police officer. But because of the people’s change of heart in Stony Point, they are now building a trust with Al.

What stirs Al’s heart at the site is the look on some of the folks faces that come through the line. Especially the children and their excitement to know someone is cooking a hot meal for them. He mentioned, “Some of the ‘grown ups,’ the look of despair replaced by a smile, a handshake or a small prayer and being able to walk away with a little help without any questions is a beautiful sight. It’s a different atmosphere every week.”

“Mission U-Too has made me understand and realize how blessed I am. It has allowed me to share what little I have with a group of individuals that genuinely care about the community of Bastrop and Stony Point and to see the need to spread the gospel of Jesus Christ, our Savior.” Al is continuing to learn what it means to spread the gospel and carrying out the Great Commission. Al share’s John 3:16 with those he serves “For God so loved the world, that he gave his only begotten Son, that whosoever believeth in him should not perish, but have everlasting life.” We should never stop understanding that God gave His only begotten Son so we may have everlasting life.  We only give of our time for Mission U-Too…He gave His Son.

Pray With Us: Living Water
Scroll to top