Three quick stories from Mission U too. A little girl jumped out of the truck and was headed toward the serving line. She had a hop in her step and a smile on her little 20 month old face. Her Dad wasn’t walking with the same confidence. You see, this week his employer had cut his hours by 30%. His check was small and was spent paying his electric bill. His dilemma was heat or groceries! Not only did we feed him but we also sent him home with some food.

Another lady came and got a hamburger. She was by herself. I sat down at the table to talk with her. She was grateful for the food. We talked a little bit longer then she asked if she could bring her neighbors over here to eat. She thanked us when we said “of course”, and then left and came back in a few minutes. She brought 5 children over and said that their mother didn’t cook a lot on the weekends and that they usually didn’t eat.

A father of 4 with 2 boys and 2 girls saw our sign for free food and stopped to talk to us. He said that he was a chef and that he would like to help us out when he could. We asked them if they wanted to eat, and after giving them a plate, we talked about where he worked as a chef. He had been laid off almost 4 months earlier and they were juggling to pay bills and buy food. They were so grateful for the food.

These 3 stories touched my heart. You see, these 3 families didn’t look like they needed a free meal. After spending time with them, I realized it wasn’t about the meals at all, but they just wanted to know that someone cared. 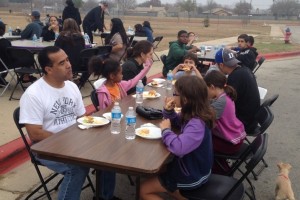